Justin Caldwell
Justin is a gaming writer who enjoys all things Zelda. From the OG Legend of Zelda on the NES to Breath of the Wild and  Hyrule Warriors on the Switch, Justin has spent countless hours wandering through Hyrule and lands beyond. Justin started out as a games tester on mobile devices and has since graduated to writing about Legend of Zelda games, characters, and weapons. When he’s not playing Legend of Zelda, Justin spends time with his wife and four children.

Part of the fun of playing Legend of Zelda: Breath of the Wild is the many armor sets available to Link. There’s the “Climbing Gear” for mountain climbing, the “Snowquill” clothing which keeps Link from freezing to death at high altitudes or in cold snowy conditions, and even armor designed to protect him from electricity.

There’s a ton of variety available for Link to keep safe out there – but one particular set of armor stands out for a particular playstyle, the Rubber Armor.

As you play Breath of the Wild, you’ll discover that the weather is not your friend. You can find your climbing mobility and other types of progress impeded by the weather as it rolls through Hyrule.

Thunderstorms, in particular, are one of the most dangerous elements. As lightning strikes, Link is forced to unequip any metal weapons or risk getting struck. If you’re wearing metal armor, you’ll have to remove that as well.

Unfortunately, there’s no way to get around the impediments caused by rain. However, if you discover and equip the Rubber Armor set, you’ll be protected from lightning when storms come calling.

There are many armor sets in The Breath of the Wild that Link can wear. One set, referred to as Rubber Armor, makes Link impervious to electric shocks and lightning strikes.

The Rubber Armor set consists of the Rubber Helm, Rubber Arm, and Rubber Tights. Each piece of the set requires completing a “Thunder” trial or quest in various areas of the game.

The Rubber Armor set in the game consists of three pieces, these being the “Rubber Helm”, “Rubber Armor”, and “Rubber Tights.” A large, articulated chest pad lined with rivets helps protect Link over his torso. On their arms are flexible pauldrons, which help increase mobility while still offering protection.

The final piece of the set is a pair of tight-fitting pants and boots. These aren’t as protective as other armor sets, as they offer no protection to Link’s legs and arms.

The Rubber Armor set is not only good-looking for something that would appear to be made out of rubber, but it also grants Link immunity to electricity damage completely.

While you can still get damaged from electric attacks, rubber armor ensures that you can engage enemies that use electric attacks without fear of taking any additional damage.

You’ll get the Rubber Helm when you complete the Thunder Magnet quest. This quest begins with a visit to Lakeside Stable, where Cima is hard at work.

When Link speaks to her, she will explain to him that lightning strikes the stable frequently, which has caused all of the metal items to rust. She tasks Link with going out and investigating what’s causing these lightning strikes so she can design a plan to stop them from happening.

By climbing to the top of Lakeside Stable, Link discovers the source of the problem: an axe stuck in the top of the stable. Since it’s made of metal material, it attracts lightning during storms. Pull out the axe, then return to Cima and report.

Doing so will result in a quick conversation with Cima, in which she wonders if the item was placed on top of the stable deliberately.

With Cima at ease and lightning no longer striking the stable, Link is presented with the Rubber Helm for his efforts.

The Rubber Armor is obtained when Link completes the Trial of Thunder quest in the Thundra Plateau. To get the armor, Link needs to head to Thundra Plateau. Upon arrival, the voice of Toh Yahsa will offer him the opportunity to take part in a trial.

Link is told to put the “four spirits” into their corresponding places. Doing so will result in an ancient shrine. When the voice stops talking, the quest for the shrine begins.

Surrounding the plateau are four different colored orbs. Link has to retrieve these orbs and place them in the basin in front of the statues that correspond with the color of the orb.

The purple sphere is on the ground near the north pillar. Furthermore, the green ball is perched on top of the southern pillar. Located on a stone statue on the east side of the plateau, you’ll find the red sphere. Finally, the orange sphere sits on a stone statue directly to the north.

Once all four orbs are up on the plateau, you can then put them into the basin of the pillar that matches. The purple orb goes with the northern statue, and place the red orb with the statue to the east. The southern statue belongs to the green orb, while the western statue is for the orange orb.

When all four orbs are in their proper basins, the Toh Yahsa Shrine will appear from the ground. Enter the shrine and claim your Rubber Armor! 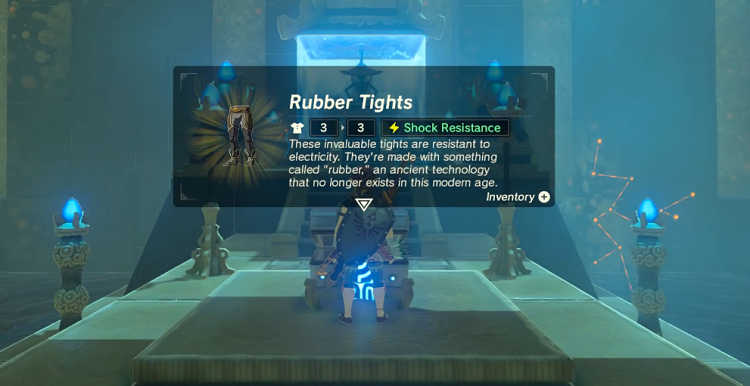 Head to Calora Lake to begin the quest for the rubber tights. Here, you will find Kass, singing a song about lightning. Since it is raining, Kass is impressed that Link has managed to find his way up so high.

He explains to Link that his feathers are water repellent and that he doesn’t need to worry about getting wet himself. Kass asks Link if he would like to hear a song he knows about the area. Once you agree to hear it, Kass will sing it for you.

In his song, Kass talks about a hero who could call lightning down from above, which would then reveal a Monk hiding in a giant mound. While Kass is aware that the verse is a riddle, he believes it could be applicable to a variety of things. He says goodbye to Link, which kicks off the quest.

Nearby you’ll see a giant mound that regularly attracts lightning. Place a metal weapon on top of the mound, then hop off, and wait for the next lightning strike. When lightning hits it, the mount will break into pieces and reveal the Qukah Nata Shrine. Activate the shrine, complete it, and receive your Rubber Tights.

Why Should You Get the Rubber Armor Set?

There are some armor sets in Breath of the Wild that leave players wondering why it was included at all. Fortunately, the Rubber Armor set isn’t one of those. With the Rubber Armor set, Link is nearly immune to lightning strikes, and he doesn’t need to wear armor that offers resistance to electricity.

This type of immunity comes in handy when fighting Thunderblight Ganon in the Vah Naboris Divine Beast. In the second half of the fight, his weapon is electrified, which can cause you all types of problems. With the Rubber Armor set, you can negate Thunderblight Ganon’s advantage and do some damage of your own!

If you’re interested in learning more about the Rubber Armor and its role in Legend of Zelda: Breath of the Wild, these frequently asked questions might have the information you’re looking for.

Question: What Do I Need to Upgrade My Rubber Armor?

Answer: The rubber armor set increases shock resistance as you upgrade it until Link is completely impervious to lightning strikes. Having this resistance level could come in handy if Link is caught in a lightning storm. It’s also handy to have when fighting Thunderblight Ganon in the Vah Noboris Divine Beast.

Question: Who is Kass and What Does he Have to Do with the Rubber Armor?

Answer: Kass sings a song about a hero who could call down lightning from above, which would then reveal a monk hiding within a mound. After playing the song, Kass gives you the quest for the Rubber Armor found in Toh Yahsa Shrine.

Question: When Can I Upgrade My Rubber Armor?

Answer: You’ll need to visit a Great Fairy and upgrade your Rubber Armor four times. There are four Great Fairies located throughout Hyrule. You’ll find one in the Akkala Region, one just outside of Kakariko Village, one in the Tabantha Region, and one in the Gerudo Desert.

Question: Where Can I Find a Vast Amount of Chuchu Jelly?

Answer: Chuchu Jelly can be found in various locations in Hyrule, including the Great Plateau. You’ll need it to upgrade your Rubber Armor set.

Question: Is there a Metal Weapon on Top of the Mound when I Get Near it?

Answer: You’ll need to drop a metal weapon onto the mound then run off of it before lightning strikes, which will break the mound and reveal a shrine.

Question: So I Beat the Game if I Upgrade My Rubber Armor?

Answer: Nope! The final upgrade makes Link completely impervious to lightning strikes, but you still take damage from any other source.

Question: What is Topaz?

Answer: You can find topaz in Gerudo Desert. Link can mine it with his pickaxe.

Question: What Does Shock Damage Do in Breath of the Wild?

Answer: Shock damage is electricity-based, which means it can damage Link if he gets struck by lightning.

Question: What is Chuchu Jelly Used for?

Answer: You can use Chuchu jelly to upgrade your armor set or sell it to earn rupees.

Question: How Do I Get Yellow Lizalfos Tail?

Answer: You need to defeat a yellow lizalfos. After defeating the yellow lizalfos, make sure to pick up its tail. You can find Yellow Lizalfos in the Gerudo Desert, the Lanayru Great Spring region, and the Gerudo Highlands.

That means if you’re out on a quest and a sudden thunderstorm rolls in, you don’t have to worry about getting shocked and losing your progress.

Plus, it comes in really handy when fighting electrified enemies like Electric Keese, Yellow Lizalfos, or Thunderblight Ganon. While you don’t always need to have your Rubber Armor equipped, you’ll be glad you have it when lightning starts to strike.

Barbarian Set BOTW Guide – The Legend of Zelda: Breath of the Wild