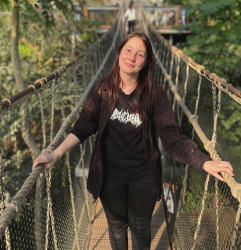 Kara Phillips-Ashman
After spending most of her childhood diving into the wonderful world of gaming, Kara is raring to share her passions and expertise through her writing. She studied journalism at university and has hosted radio shows, podcasts, and has written for a number of publications such as GamesRadar+. Additionally, she is a massive fan of titles like The Legend of Zelda and Animal Crossing - but won’t shy from an intense game of Super Smash Bros Ultimate.

At first, many players and fans of the franchise were skeptical of the reboot. I questioned why Link’s Awakening was receiving a third chance, but after seeing the adorable art style and 3D landscape, every concern drifted to the back of my mind.

Whenever a classic game receives a reboot, there are two halves to everyone’s mind. One half hopes the game provides the same joy and nostalgia as the original did, but the other suggests the game needs something new to keep it relevant to the current timeline.

Which I think Link’s Awakening successfully achieves. Rather than keeping every look and mechanic authentic to the Game Boy version, aside from receiving a new look – the game gains a lot of new mechanics as well.

Among these new mechanics are a familiar face and the ability to create a unique experience through dungeon crawling.

Rather than relying on the dungeons already made for the game, Link’s Awakening on Nintendo Switch opens the doors for players to create hours of fun in their own handmade dungeons, crafting using a variety of chambers and their accompanying stones, which Dampé will teach you to utilize.

Dampé is a recurring character throughout the Legend of Zelda franchise, appearing in Ocarina of Time, Majora’s Mask, Four Swords Adventures, the Minish Cap, and A Link Between Worlds. However, his role in Link’s Awakening is one of his most significant.

He’s incredibly pale and troll-like in looks, which may be because of his gravekeeper profession. I’d say that Dampé has a questionably undead appearance, which may be why he’s referred to as Igor in other languages.

As I’ve mentioned, Dampé was a gravekeeper and gravedigger in previous Zelda titles, but his role shifts slightly in Link’s Awakening.

While he still maintains the same appearance and holds a shovel and a lamp as though he’s ready to go back to the cemetery at any point – rather than controlling the dead, he is given the power of creating a specific type of dungeon.

Given he has the right tools, he can craft chambers based on the dungeons around Koholit Island, which can then be turned into chamber dungeons.

To provide Dampé with the right tools so that you can start to unlock these chamber dungeons, you will need to begin your hunt for Chamber Stones.

What is a Chamber Dungeon?

To start hunting for Chamber Stones, first, you’ll need to understand what a Chamber Dungeon is. Within Link’s Awakening, there is a considerable number of chambers that Dampé uses to create chamber dungeons.

Chambers are replicas of rooms you’ve probably already seen, depending on how many hours you’ve spent in the room. Still, instead of repeatedly running through the same area, chambers can be spliced together by Dampé to create a unique experience.

As you progress through the title, a wider variety of chambers and opponents will become available. With the addition of Chamber Stones you collect along the way, you can start churning out some challenges.

To make this experience even more interesting, you can fill these dungeons with bosses, monsters, and any challenge you’d love to face again. Personally, Nightmare’s Lair tiles are my favorite to include in my dungeons since they are just as intimidating as you want them to be.

Taking bosses from the end of dungeons throughout the game and putting them into an already challenging dungeon can be so fun to attempt repeatedly. I’d highly recommend using Slime Eye’s tile when you can because that boss is oddly charming.

How to Unlock Chamber Dungeons

To unlock Chamber Dungeons and meet Dampé, you need to start by collecting Roc’s Feather from the first dungeon, Tail Cave. Access to this item will make leaping across pits in the ground possible, and you can begin to head towards your second dungeon, Bottle Grotto.

The world of Link’s Awakening is incredible to explore, and the art style had me wanting to discover every secret and hidden area. Keeping on track to head from dungeon to dungeon felt impossible, but once I learned I could start to make some unique dungeons at the following location, I wanted to progress as quickly as possible.

Once you’ve completed the second dungeon in Tal Tal Heights, head east of the cave where you rescue BowWow, and you’ll meet Dampé. He takes on his classic gravekeeper appearance, but his features are more rounded and cute than you’ve seen in other titles.

Once you get chatting, he’ll invite you back to his shack, where you can begin the chaos of creating your own dungeons.

But Dampé sets down a few rules before you can begin. For example, each Chamber will have an exit or two. Each of these exists to connect to another room, which is the same as staircases. You’ll know when you’ve attached these tiles correctly as they will change from red to blue.

Additionally, every Chamber Dungeon has to have a start and end boss. It’s no use giving yourself an easy run to cash out rewards! As any Zelda game goes, you’ll need something to spice up gameplay and give you a challenge.

A successful run-through of the dungeons you create means you’ll be able to save the design, and Dampé will reward you for your success. I probably wouldn’t have put so many hours into the gameplay if there were no reward. Ironically, these prizes tend to be more chambers and stones to add to your collection.

I like to refer to Chamber Dungeons as a vicious cycle since once you’ve started creating them and receiving the ability to create more, you won’t want to stop.

Outside of completing your creations and Dampé rewarding you for your hard work, there are several other ways to gain access to Chamber Stones. Several chamber stones can be unlocked with the Legend of Zelda amiibo figures.

Still, the best way to find the remaining stones – and my favorite method – is through various locations around Koholint Island.

Fourteen Chamber Stones are available to receive as prizes for various tasks involving exploring Koholint Island. They involve a lot of collecting and engaging with mini-games, so be prepared to spend a lot of time hunting if you want to expand your collection.

Here is a complete list of all fourteen locations, followed by a brief description of where and how to gain access to them:

The Town Tool Shop is home to seven Chamber Stone, which can be purchased for 1’280 Rupees each. This is one of the easiest methods to getting Chamber Stones, despite being on the more expensive scale. To any avid adventurer who has cash burning a hole in their pocket, the entire set will set you back 8’960 Rupees.

The Trendy Game, located in the southeast of Mabe Village, is home to two Chamber Stones. You can win one by completing the Catfish Maw – the fifth dungeon in Link’s awakening – and the other by collecting all ten figures. All figures can be obtained through Trendy Game as soon as Link finds the Yoshi Doll.

Like the Trendy Game, the Fishing Hole is home to two Chamber Stones. One stone is rewarded to Link once he catches a standard Ol’ Baron, and the second after Link catches a big Ol’ Baron. The difference between the two is the weight. The fish must come in at over sixty units to class as a ‘Big’ Ol’ Baron.

Seashell Mansion is another area within Link’s Awakening that homes two Chamber Stones. To unlock both, you must focus on collecting secret seashells, also known as mysterious shells, scattered across Koholint Island. After thirty seashells have been collected, you will receive a Chamber Stone.

Once you’ve collected sixty seashells, the same reward will be gifted. Although collecting sixty seashells may seem extensive, once Link can take BowWow for a walk, BowWow can sniff out seashells and hint at their location. I loved that this sped up the process of finding them.

Unlike the other locations, the Raft Shop is only home to a single Chamber Stone. You must complete the Rapids Race in less than thirty seconds to unlock this item. It seems relatively simple from the get-go, but every time I go into a Zelda puzzle, knowing I have to complete it within a time frame, the difficulty is always ramped up.

Question: Where Can I Find the BowWow Figure?

Answer: The BowWow figure is one of ten figures required to receive a Chamber Stone but is arguably the hardest to find. Every other figure in this small collection can be obtained through playing the Trendy Game, but the BowWow figure can only be received by completing the game.
Luckily, this doesn’t mean the game has to be completed at 100% – but the primary campaign will need to be finished.

Question: Do You Need Every Chamber Stone to 100% Link’s Awakening?

Answer: Several factors come into play to complete Link’s Awakening at 100%. Completing Dampé’s twenty-four Chamber Dungeons alongside the location of all fourteen stones is a necessity.
But while this task may seem intimidating, it’s relatively insignificant compared to the other tasks the game requires you to complete before completion. Locating fourteen stones is simple compared to tasks like clearing the game without dying, which is made especially hard when you need to do this twice – the second in hero mode.

Question: Where Does Link’s Awakening Fall in the Zelda Timeline?

Even though connecting with Dampé and creating your own dungeons isn’t essential to enjoying Link’s Awakening, it is still an entertaining addition to the game that any Zelda fan would love.

As much as I love the premade dungeons and puzzles of Zelda, finally being able to take the reigns and create something I could challenge myself with felt like a long-awaited mechanic in the franchise.

In addition, there have been several instances in a Zelda title where I’ve felt like an extra boss in an area could hugely benefit combat. Being able to add that has massively improved my experience with the game, and I think the same can be said for anyone skeptical of Link’s Awakening in the first place.

Golden Bugs Guide: Catch them All to Be the Belle of the Bug Ball